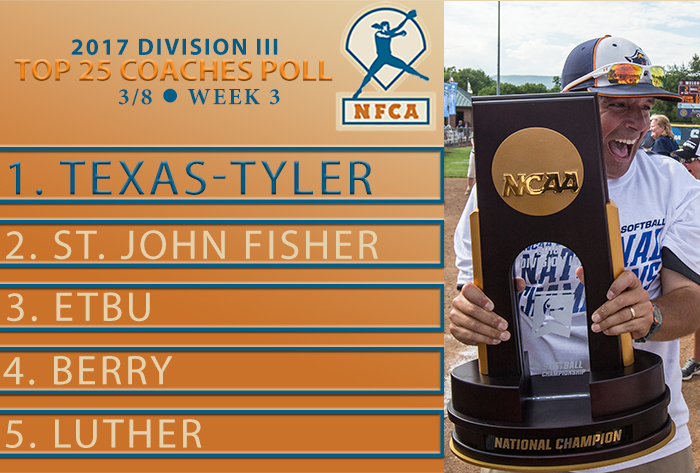 LOUISVILLE, Ky. — For the fifth straight week and 15th time in the last 16 weeks, Texas-Tyler is the unanimous No. 1 team in the National Fastpitch Coaches Association (NFCA) Top 25 softball rankings.

Last year’s third-place national finisher St. John Fisher (6-0) got off to a strong start last week to remain second in the rankings, while No. 3 East Texas Baptist (14-0) has continued to roll heading into its three-game American Southwest Conference showdown with Texas-Tyler this week.

Berry (16-0) and Luther (6-0) stayed fourth and fifth, respectively, while fellow unbeaten Virginia Wesleyan (16-0) continued its climb up the rankings — five more spots this week, to sixth — after taking down last week’s No. 6 Manhattanville, which had the biggest fall of the week (15 places) following an 1-3 start, which included losses to two ranked teams.