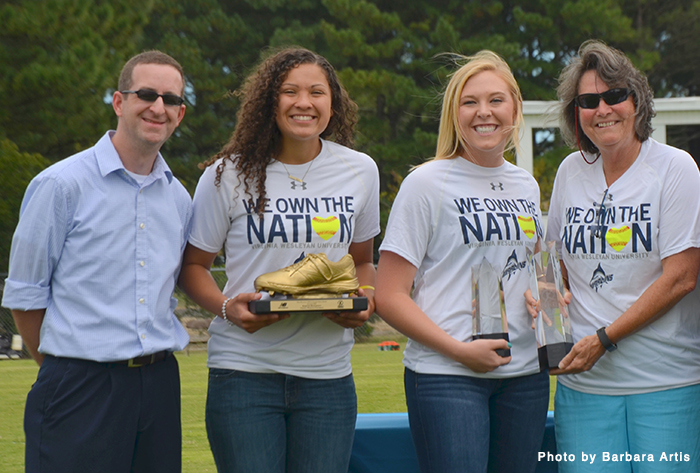 NFCA Division III liaison Dave Hines was on hand for the ceremony at halftime of the Marlins’ women’s soccer match with Randolph College, which also featured the presentation of NCAA championship rings to the team. Earlier in the day, Virginia Wesleyan held a reception for its softball alumni and played its alumni game.

Hull helped guide the Marlins to their first softball national championship with a 32-3 mark, 0.51 earned-run average, just 90 hits allowed and 372 strikeouts in 220.1 innings in her first college season. She set school marks for season ERA and strikeouts, and had a program-best 19 strikeouts in a two-hitter against Bridgewater on April 22. In 41 appearances (32 starts), Hull tallied nine three-hitters, nine two-hitters, five one-hitters and no-hit William Peace on March 7.

In six NCAA Championship contests to close the season in Oklahoma City, Hull went 3-1 with two saves, a 0.90 earned-run average and 46 strikeouts in 31 innings. She pitched two three-hitters and had an one-hitter with 13 strikeouts against St. John Fisher in game one of the best-of-three NCAA Championship Series en route to NCAA Championship Most Outstanding Player honors for the (54-3) Marlins.

Richardson, meanwhile, collected the third-most stolen bases in a season in NCAA Division III history to extend Virginia Wesleyan’s legacy of Golden Shoe recipients to two straight and three winners in the last four years. She had 64 steals in 65 attempts during her junior season, including eight in the Marlins’ NCAA Tournament run.