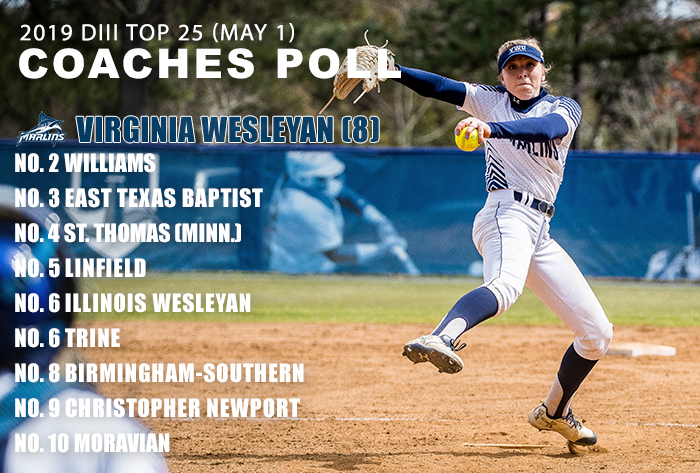 The (40-4) Marlins have now won five straight heading into NCAA play after dropping their second game of the ODAC tournament, 3-2, to Randolph-Macon (26-14), which just missed making the Top 25 after receiving votes for the first time since April 3. Virginia Wesleyan defeated the Yellow Jackets twice to win their 12th conference championship overall.

Randolph-Macon now has five ranked victories this season, including beating the top-ranked Marlins twice. They also defeated Christopher Newport (31-6) when the Captains were the No. 1 team earlier this season.

Meanwhile, Williams (31-4) continued its surge up the rankings, moving up another spot this week to second. The Ephs swept two from Smith and three from Wesleyan (Conn.) to run their win streak to 20. East Texas Baptist (36-4) moved up one place as well, following a three-game sweep of McMurry, to also jump ahead of St. Thomas (35-5), which is now fourth.

Elsewhere, familiar face Central (24-8) jumped back into the mix at No. 22 this week, while poll regulars Randolph-Macon and Muskingum (31-9) are back receiving votes.