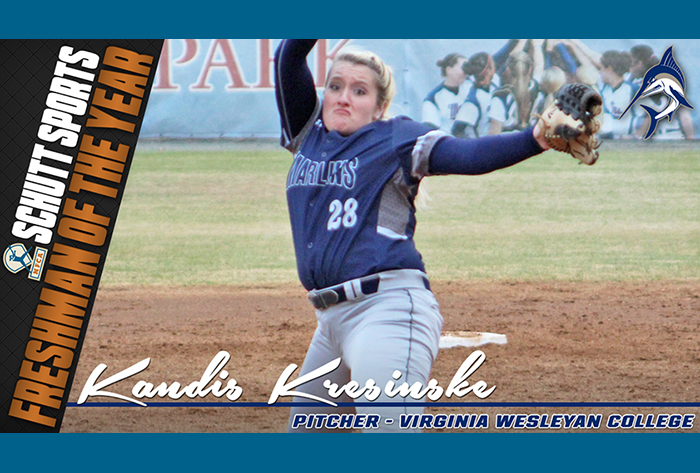 LOUISVILLE, Ky. — The National Fastpitch Coaches Association is proud to announce that Virginia Wesleyan College’s Kandis Kresinske has been selected as the recipient of the inaugural Schutt Sports/NFCA Division III Freshman of the Year award.

Kresinske, a right-handed pitcher from Chesapeake, Va., went 18-2 as part of a lethal 1-2 punch in the circle with senior Mary Shipp (19-5, 1.27 ERA) for the top-ranked Marlins this season. She collected seven shutouts, 117 strikeouts and allowed just 31 walks and 20 earned runs in 124.1 innings this season.

Her 3.88 hits allowed per game rank fourth nationally in Division III and her 1.13 ERA currently rates 13th in the country.

Kresinske was also one of 45 players chosen for the 2016 NFCA Division III All-America team. An at large selection, she was joined on the first team by two Marlin teammates, senior outfielder Courtney Bogan and sophomore first baseman Cassetty Howerin. She was one of just two freshmen — with Aurora University catcher Elaine Walker — on the first team of the All-America squad.

The honorees were recognized on Wednesday during the NCAA Division III Championship banquet at the Salem Civic Center in Salem, Va.

The Schutt Sports/NFCA Division III Freshman of the Year and the NFCA Division III All-America softball teams were selected by eight NCAA Division III head coaches representing each of the eight NCAA regions. Those earning first team All-Region recognition were eligible to move forward to be considered to be chosen by the committee as All-Americans. NFCA member coaches nominate and vote for the Association’s All-Region teams.