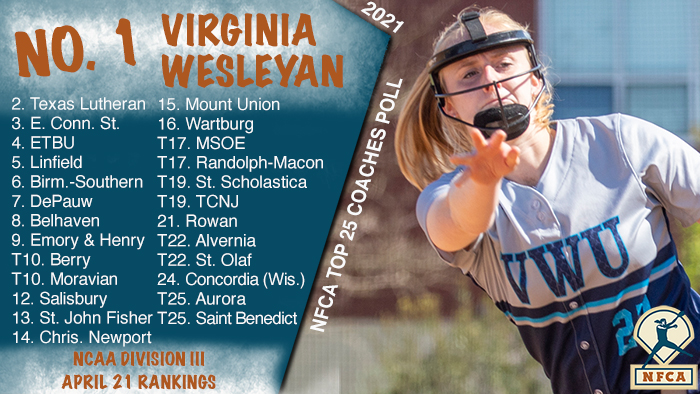 LOUISVILLE, Ky. — Virginia Wesleyan unleashed an offensive assault on its opponents this past week to solidify its standing as the No. 1 team in the NFCA Division III Top 25 Coaches Poll.

The (27-3-1) Marlins outscored their six opponents 71-12 to extend their win streak to 10 games. They scored 10 or more runs in every contest, including overwhelming Eastern Mennonite, 27-1, in a doubleheader sweep on Tuesday.

Defending national champion Texas Lutheran (25-4) captured two games last week, and have now won 17 straight, and 21 of its last 22, to stay firmly in the second position, while Eastern Connecticut State (20-0) continued its climb up the rankings, gaining another two places this week, to round out the top three. The Warriors have now won 33 of their last 35 games, and haven’t lost since May 26, 2019, when they fell 3-2 in an eight-inning heartbreaker to eventual national runner-up Emory at the NCAA Championship finals in Tyler, Texas.

The NFCA Division III Top 25 Poll is selected by eight NCAA Division III head coaches representing the eight NCAA regions. Current records are listed, with first-place votes in parentheses. In 2021, schools that are not competing will not be eligible for the poll.