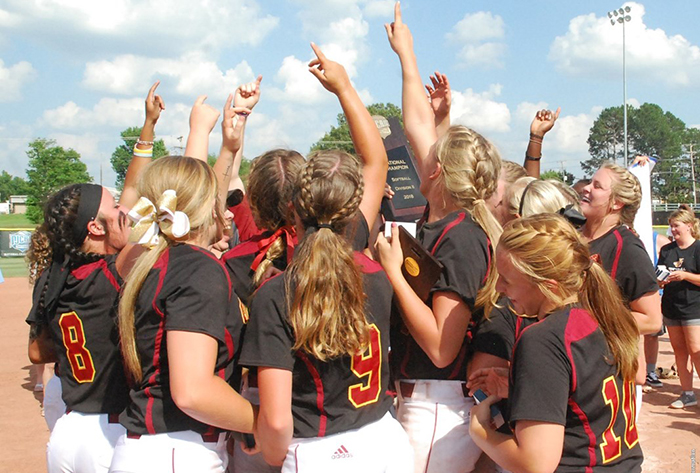 "I'm so happy for our kids, our program, our school and our administration," said ninth-year head coach Chris Robinson, who has guided JCJC to six national tournament appearances in seven years. "When we started back in August, I said if they bought in, we would have a chance to play on the third Saturday in May and they lived up to it. I'm very thankful for those 18 kids and our three coaches."

JCJC sent 11 batters to the plate and scored seven runs in the bottom of the first inning to put the game out of reach early. The Lady Bobcats outscored their opponents, 69-12, and belted 15 home runs over five tournament games.

Tournament Most Valuable Player Kelsha Loftin had quite a week, capped off by a tremendous performance in the title game where she was 4-for-4 with two home runs, a double, a single and six RBI.

"To finally do it, it just feels amazing because we work so hard each and every day," Loftin said. "I'm just overwhelmed. It was a whole team effort. We just feed off of each other and when one person gets a hit, the next one wants to."

Perque went the first four innings, gave up an unearned run, three hits, walked two and struck out three. She got the win to end the year at 24-2. Donald pitched two innings, allowed one run and two hits. Burge tossed the final inning and retired all three batters she faced.

O'Kelly had two singles for the Bears with Paolinelli getting a double. Whitten and Haley Johnston added singles. Hanna Krosky started and took the loss. She faced six batters and did not retire a Lady Bobcat. She allowed six runs, two hits and walked four. Kiana Carr pitched six innings, allowed 12 runs, 11 hits, walked six and struck out seven.