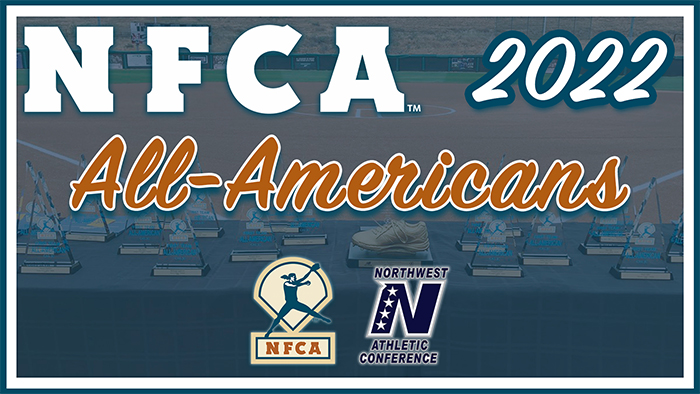 Walla Walla’s quartet of pitcher Haylee Brown, second baseman Rylie Bennett, outfielder Kate Hopkins and Bailee Noland (DP or Utility/Non-Pitcher) led the top-ranked Warriors to an undefeated run (32-0) through the NWAC Eastern Region and a 42-2 overall record. Brown tops the league with 25 wins (25-1), is second with 172 strikeouts and is third fanning 9.1 batters per seven innings. She helps out offensively, hitting .455 with 12 home runs, 41 RBI and a .943 slugging percentage.

SWOCC corner infielders, Hannah Tennant (first base) and Brittany Bye (third base), along with Utility-Pitcher Alyssa Smokey keyed the Lakers to a 38-6 overall record and 21-3 in South Region play. Tennent hit .425 with 19 doubles, 14 homers and 67 RBI. Bye and Smokey are earning their second straight All-America honors. Bye has clubbed 19 long balls, drove in 76 runs and is slugging .959, while hitting .459. Smokey is 18-2 with a 2.19 ERA and has 168 strikeouts in 121.2 innings of work. She has fanned over 9.5 batters per seven innings and earned two saves. Offensively, Smokey hits at a .525 clip with 12 home runs and 55 RBI.

Two-time All-American Kaylie Hoskins of Everett Community College rounds out the trio of pitchers. Hoskins tops the NWAC with 251 strikeouts, fanning 14.2 batters per seven innings. She ranks second in ERA (1.92), third in wins (16) and fourth in batting average against (.196).

Earning All-America honors at shortstop is North Idaho College’s Taryn Vanderwiel, who is fourth overall with 81 RBI. She clocks in with a .534 batting average, a league-best 27 doubles, nine round trippers and 72 runs scored. She slugs .890 and is third-best with 87 hits.

Capturing the final two nods in the outfield are Sydney Stolze of Clackamas Community College and Marleigh Horrocks of Big Bend Community College. Stolze hits .456 with 45 runs scored and has swiped 23 bases. Horrocks bats .411 with 12 doubles, 16 homers, 35 RBI and 57 runs scored. She slugs .877, reaches base at a .488 clip and has 16 stolen bases.