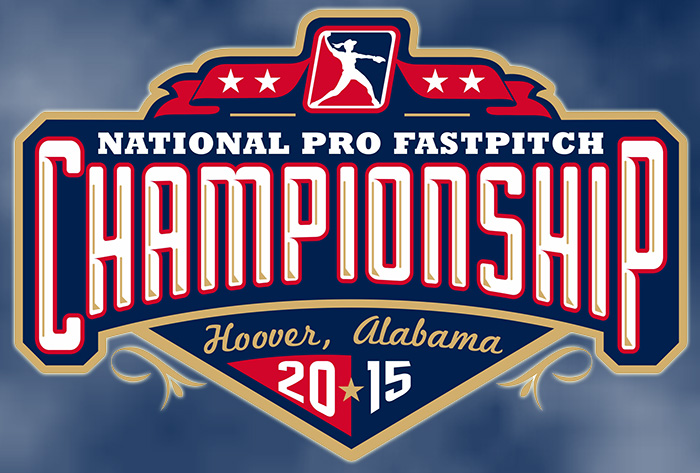 NASHVILLE, Tenn. - The field of four teams is set for the 2015 National Pro Fastpitch Championship Series. With a down-to-the-wire clinch, and only one regular season game remaining, the Dallas Charge (16-30) became the fourth and final team to secure a spot. Dallas will join the regular season champions and #1 seed, USSSA Pride (34-14), #2 seed Chicago Bandits (30-16), and #3 seed Akron Racers (22-24) in Hoover, Ala. for action set to begin on Friday, Aug. 14.

The determination of the final four teams came down to the season’s last series and forced a tie breaker decision. A PA Rebellion loss yesterday to the Akron Racers placed Dallas and PA in a best-case scenario of ending the regular season tied in the standings. In that situation, the tie breaking policies point first to head to head competition between the tied teams. Dallas and PA were 6-6 in regular season competition forcing step 2 of the tie-breaking procedures, which is each team’s record against the best team. in 2015, the top finisher is USSSA. Versus USSSA, the Rebellion record in 2015 was 1-11, with the Charge at 3-9. Consequently, the Dallas Charge became the fourth and final team to enter the field, capturing the #4 seed.

For the fourth time and the second consecutive season, the USSSA Pride captured the regular season championship. With regular season titles in 2011, 2012, 2014, and 2015, this marks the second time USSSA has entered the Series as the top seed in back to back seasons.

The Championship Series event will take place over five days at the Hoover Metropolitan Stadium. This is the second year Hoover plays host to the hallmark event of the NPF. The event features three - best of three series and kicks off competition Friday, August 14 at 5:00 pm CT followed by a second game scheduled for 8:00 pm CT.

The opening two series will feature the best of three square off between #1 USSSA Pride and #4 Dallas Charge, along with the match-up of  #2 Chicago Bandits versus #3 Akron Racers. Those opening round series will take place on Friday and Saturday. If either or both series’ push to a third “If Necessary” game, those will take place at 5:00 and 8:00 pm Saturday evening.

The USSSA Pride will attempt to defend their 2014 title and become the first team to ever win back-to-back-to-back Championship Series. The Pride will be going for their fourth overall Cowles Cup having won in 2010, 2013 and 2014. A title in 2015 would make the Chicago Bandits tied with USSSA in overall Cowles Cups, giving them their third. The Bandits took the trophy home in 2008 and 2011. The Akron Racers have one Cowles Cup in the trophy case, winning it all in 2005. The Dallas Charge will attempt to take home the trophy in their inaugural NPF season.

All games will be carried live on the home of NPF, CBS Sports Network, with the exception of the opening round “If Necessary” games, which will be aired via tape delay on Sunday morning, prior to Game 1 of the Final Series. The broadcast team of Eric Collins and Barbara Jordan will deliver all the action.

The Championship Series will feature nearly an entire week of events beginning with a Media Night on Wednesday, August 12. Media members and local celebrities will be on hand to attempt to make contact off live pitching from some of the NPF’s rostered pitchers. Athletes and coaches will be available and on hand for pre-Series interviews.

Thursday night features the annual NPF Awards Banquet, an event which honors the outstanding performances of players and teams throughout the regular season. The event is held at the Series host hotel, The Hyatt Regency Wynfrey Hotel located in Hoover, and is open to the public.

A youth clinic, taking place on Saturday August 15 caps the ancillary event slate on Saturday. The clinic, open to young softball players under 18 years old, will be held at the Hoover Met Stadium Saturday morning from 8:30-10:30. All camp participants receive a free pass to the entire line-up of Saturday’s NPF action at the Met, which guarantees two games at 11:00 am CT and 2:00 pm CT, and could also push to as many as two additional “If Necessary” games scheduled to take place at 5:00 pm CT and 8:00 pm CT.

To purchase tickets, go to the NPF Championship Series website at “championship.profastpitch.com

” or purchase tickets on site at the Hoover Met box office. For additional information or ticket purchases call the NPF League office at 615-324-7861.

-- Courtesy of the NPF