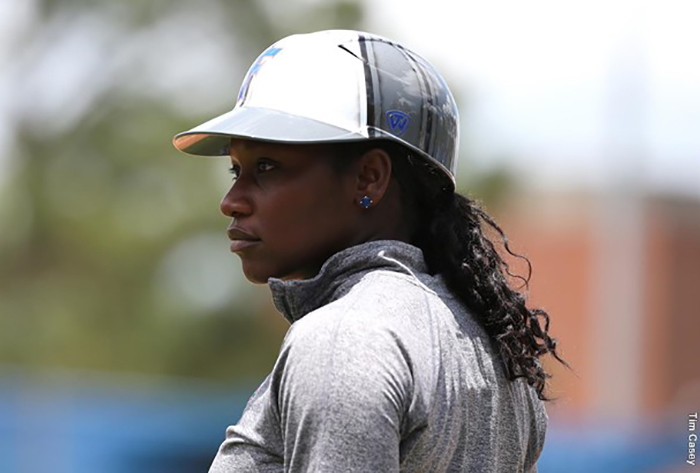 will be the team's new head coach for the 2017 season.

McDonald, who is in her second year as an assistant coach with the Gators, oversees the development of the Florida outfield and last season that included the program's first ever Southeastern Conference & National Fastpitch Coaches Association (NFCA) Freshman of the Year in now sophomore Amanda Lorenz.

Lorenz finished her freshman campaign with the Gators fifth highest batting average (.403) and second highest on-base percentage (.528) ever in a single season.

The Bandits have won the league's title, the Cowles Cup, in back-to-back seasons and have hoisted the cup a total of four times, which is the most by any team in the NPF since the Cowles Cup was introduced in 2004.

Considered as one of the brightest young minds in the game, McDonald has made strides in each of her four different coaching stops which includes Texas Tech (2015; associate head coach), LSU (2313-14; volunteer assistant), Ohio (2010-12; assistant coach) and Texas Southern (2008; assistant coach).

The Houston, Texas native is no stranger to the NPF as she spent six season playing in the league. In 2014, she spent the season with the USSSA Pride after playing the 2010-12 campaigns with the Akron Racers and the 2007-08 seasons with the Philadelphia Force.

Aside from the NPF, McDonald spent the 2009 season playing with the Fiorini Softball Club of the Italian Professional League.

A three-time All-NPF selection during her career, McDonald garnered the prestigious Diamond Spikes Award in 2012 after hitting .303 with 13 stolen bases while with the Racers. She ended the 2014 season with a career average over .270 to go along with over 100 runs scored during her professional career. The Pride closed the year with a two-game series sweep over Akron to win its second-straight NPF Cowles Cup.

The NPF season starts in June with it set to conclude in August with the 2017 NPF Championship series starting August 17. The Bandits full schedule can be found HERE.

What They Are Saying

Chicago Bandits GM Toni Calmeyn:
"We are excited to have Sharonda McDonald join the Bandits program. She comes highly recommend by her peers and when it came to filling our head coaching position, she was the first and foremost candidate that we looked at when going through this process. The amount of knowledge and experience that she has gained through having a successful playing career in the NPF and now most recently as an assistant coach at Florida; it gives us the utmost confidence that she is the right fit to lead the Bandits."

Sharonda McDonald:
"First, I would just like to say thank you to Bandits General Manager Toni Calmeyn for allowing me to have this opportunity. I am humbled and excited to be back a part of the NPF and such a historic program like the Bandits organization.  After having spent several years in the league as a player, to have the chance to gain more experience working with so many talented players is something that I look forward to in the coming months."

have been members of the National Pro Fastpitch (NPF) league. Located in Rosemont, the Bandits provide an opportunity for female fastpitch players to further their careers at a professional level, and the roster has included such names as Jennie Finch, Stacy May-Johnson, Monica Abbott and Tammy Williams. The four-time NPF Champions play at The Ballpark at Rosemont, the only stadium in the country built for a women's professional team. The 2017 season will be the Bandits 13th season in the NPF.

About the NPF
National Pro Fastpitch

is headquartered in Nashville, Tenn.  The league, created to give elite female fast pitch players the opportunity to pursue a professional career in their chosen sport, has operated since 1997 under the names of Women's Pro Fastpitch (WPF) and Women's Pro Softball League (WPSL). NPF is the official Development Partner of Major League Baseball in the category of women's fast pitch softball since 2002.