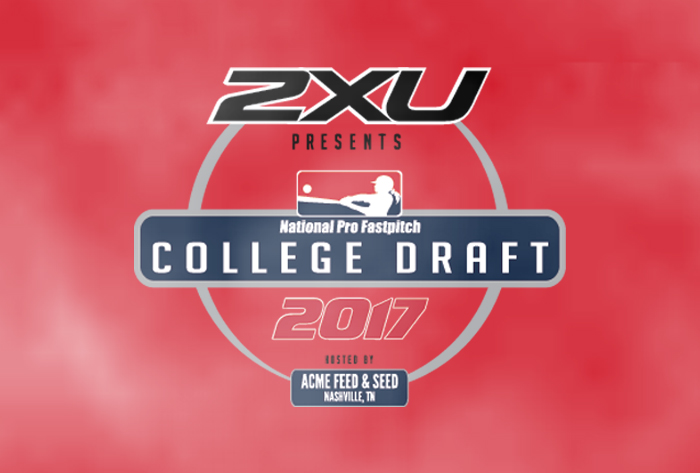 NASHVILLE, Tenn. - National Pro Fastpitch announced the 2017 NPF Draft Presented by 2XU will take place on Monday, April 24th, at 7:00 pm CT and will be available to fans worldwide via live streaming on NPFTV, the NPF’s exclusive digital platform.

The 2017 Draft will feature a new production look and new venue as it is hosted for the first time from Acme Feed & Seed, a multi-tiered, 22,000 square foot entertainment venue located in the heart of Nashville’s downtown Broadway district. All five NPF teams will participate in the five-round, 26-selection draft, with USSSA slated to make the first pick, a position they have enjoyed through trade deals, twice in the last three years.

“We are looking forward to integrating more athlete reaction into this year’s draft,” commented NPF Commissioner, Cheri Kempf. “This is a night for 26 individuals to be honored with the prestigious opportunity of continuing their careers professionally, and we look forward to sharing the moment they hear their names called with viewers throughout the world, on NPFTV.”

The draft positions are based on the previous regular season finishes, from last to first. Those positions change, however, throughout the year through trades and restricted free agent deals that involve draft picks. In 2017, at least half the current 26 established positions have been adjusted due to player transactions.

After four years at the Country Music Hall of Fame & Museum, Acme Feed & Seed steps into the host location in 2017. Acme is a top destination for locals and tourists alike with a uniquely “Nashville” atmosphere that honors the city’s unparalleled character.

Streamed live on NPFTV, links will be readily available on NPF league and team websites and through the easily downloadable NPF app. It is a free event for all viewers and will jump-start Version 2.0 of NPF’s exclusive digital platform of NPFTV, which initially launched with the 2016 regular season. Fans can also follow along in real time on NPF’s social media platforms of Facebook, Twitter and Instagram.

Round sponsors of the Draft include Eye Black, the Official Eyeblack of NPF and First Tennessee Bank. The 2017 NPF Draft presented by 2XU will be an invitation only event and will not be open to the public.