NFCA announces 2019 Board of Directors 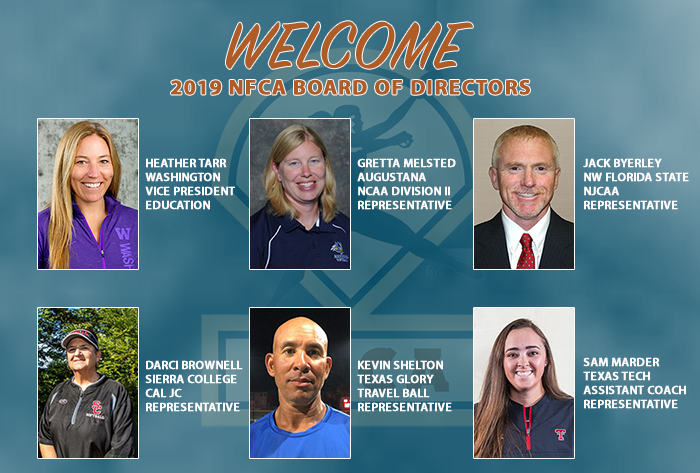 LOUISVILLE, Ky. – Six members were voted to the NFCA’s Board of Directors for 2019, the Association announced on Thursday morning. The six coaches will officially begin their three-year tenures in January of 2019.

For Tarr, Melsted, Byerley and Marder, it is their first board appointments, while, Brownell and Shelton have served as their respective representatives previously. Marder moved from an Assistant Coach role into an Associate Head Coach position during this year’s committee involvement and voting process.  Because of this, she will serve a one-year term.  The Assistant Coach Representative position will be up for election again next year.

Heather Tarr, who has guided Washington to six Women’s College World Series appearances, enters her 15th season at the helm of her alma mater. The Huskies are coming off a 52-win season and WCWS runner-up finish in 2018. The all-time winningest coach in UW athletics history has steered the Huskies to 532 wins, a 2009 national championship and four 50-win seasons. Tarr has tutored 24 NFCA All-Americans, seven Pac-12 Players of the Year, and 84 All-Pac-12 honorees.

Gretta Melsted enters her 13th season at the helm of Augustana’s (S.D.) softball program. Melsted has guided the Vikings to eight NCAA Division II Tournament appearances, including six straight trips from 2010 to 2015. Melsted captured her 500th career win and 400th at Augustana in 2017 and owns an overall coaching mark of 548-301, including 467-237 in 12 seasons at Sioux Falls, S.D. school. Since 2010, her squads have won 50-plus games three times and 40-plus on four occasions.

Jack Byerley (Head Coach, Northwest Florida State College) – NJCAA Representative
Since arriving at Northwest Florida in 2008, Jack Byerley has led the Raiders to 378 wins, 10 FSCAA state tournament appearances and three Panhandle Conference championships. Enjoying success as a collegiate and high school coach, Byerley spent time at the helm of Francis Marion (2002-04 / NCAA DII), Central Alabama CC (1996-99 / NJCAA) and Robertsdale High School (1995-96) in Alabama. He pioneered the installment of fastpitch softball at Robertsdale in 1995 and led the squad to back-to-back state titles and a 107-9 record. He was Central Alabama’s first head coach and earned AJCA Coaching of Year honors in 1997 and 2000. Byerley also guided Francis Marion to 73 victories and the program’s first NCAA Division II national ranking. Additionally, he spent time as a NCAA DI assistant coach at Florida and Auburn.

Darci Brownell enters her 19th season as the Wolverines’ head coach. Under her guidance, Sierra won a 2014 CCCAA state title, posted a state runner-up finish in 2009 and made 18 trips to the state playoffs, including six appearances in the elite eight. In 2014, Brownell and her staff were recognized as the NFCA’s Cal JC National Coaching Staff of the Year. She was also named Big 8 Conference, NorCal and State Coach of the Year in 2010, following the Wolverines league title and regional finals appearances. The 2009 squad won a school-record 44 games, contributing to Brownell’s stellar coaching mark of 671-194-1 at Sierra. She has tutored 26 NFCA All-Americans and 99 student-athletes have gone on to earn collegiate scholarships.

Kevin Shelton, the co-founder and longtime leader of the Texas Glory organization, is the head coach of the 18u Gold team, which has been ranked in the top 11 nationally by U.S. Club Softball for seven consecutive years. Shelton and his staff have been named the NFCA Travel Ball South Central Region Coaching Staff of the Year twice and garnered the Association’s national honor in 2014. Additionally, he is the General Manager of the Ballfields at Craig Ranch facility. Shelton founded the NPF’s Dallas Charge and was the team’s general manager in 2015 and 2016, while also serving as the NPF’s Scrap Yard Dawgs’ general manager at its inception.

Entering her third year with the Red Raiders, Sam Marder will serve her first season as the associate head coach in 2018-19.  Marder, a 2016 Ohio State Athletics Hall of Fame inductee and former professional player, oversees Texas Tech's offense while also working with the Red Raider catchers and assisting with recruiting. In her first year with the program, the Red Raiders eclipsed 50 home runs as a team, compiled 13 triples to match its fourth-best output in school history and increased its number of bases on balls. With Marder's guidance, sophomore Jessica Hartwell finished the regular season as the only Big 12 player with 10 or more home runs and 12 or more doubles.