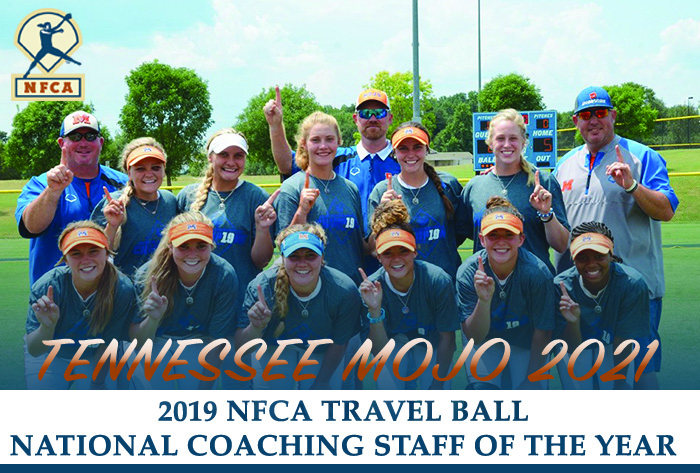 LOUISVILLE, Ky. – Tennessee Mojo 2021’s Brooks Cherry and his staff were recognized by their peers as the 2019 NFCA Travel Ball National Coaching Staff of the Year, the Association announced on Friday afternoon.

Coming out of the NFCA’s South Region, Cherry, along with assistants Wayne Key and Mark Sellers, guided the Mojo to the 16u Junior Olympic Cup title. It marked the eighth national title for the 2021 squad, which defeated the Williamsburg Starz in the championship game. The Mojo finished 10thoverall in final National NPS Rankings (US Club Rankings) for 16u.

This is the first NFCA national honor for Cherry, who also captured a South Region nod in 2017. Additionally, the Mojo organization has taken home a regional accolade the past four seasons.

Along with the Mojo, Virginia Unity 18u (East), Beverly Bandits 16u – Team Conroy (North), Texas Glory 2024 (South Central) and E.C. Bullets California 2020 (West) garnered NFCA Regional Coaching Staff of the Year recognition and were in contention for national honors.

To be recognized by your peers, gain access to our Drills Database, receive an exclusive Coaching Toolspackage (new each year) presented by USSSA, and many more member benefits, JOIN TODAY.