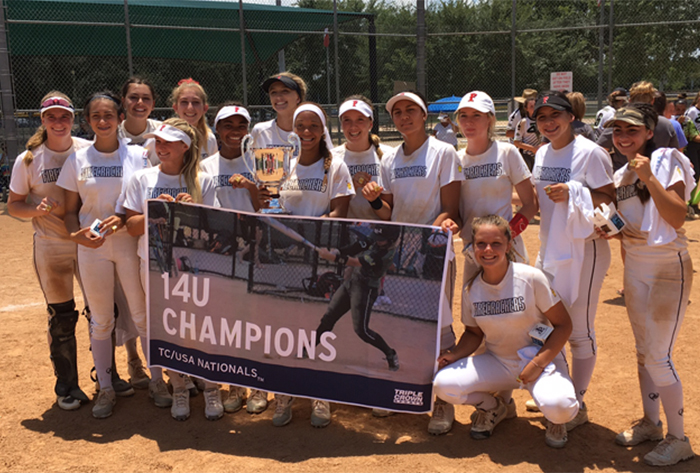 AUSTIN, Texas - So Cal Athletics (18u), Beverly Bandits (16u) and Firecrackers TJ (14u) claimed their respective championships at the 2017 TC/USA Nationals.

Boosted by their one-run victory in comeback fashion in the semifinals, the Athletics were solid in every respect in the final, taking down the Gold Coast Hurricanes 8-1 to earn championship honors. Clutch hits early, steady offensive pressure throughout, and dynamite work in the pitching circle had the Athletics (ranked No. 2 in US Club Rankings) looking the part of a dominant squad.

Lauren Espalin recorded a sharp two-run single in the first inning for the Athletics. Espalin also registered hits in the third and fifth innings, which allowed her team to slowly build the lead. Hannah McEwen came through with three hits, including an RBI triple in the sixth inning, and she also scored twice.

Starting pitcher Maddy Dwyer allowed Hurricanes leadoff hitter Sam Russ to reach first base and later score in the first, but that was all the wobble Dwyer displayed. She allowed four hits and a walk in her five innings of work.

Danielle Romanello had a single, triple and RBI for the Hurricanes. Briana Marcelino added two singles.

Montana Fouts, one of the most imposing pitchers in the 2018 class, gave her Beverly Bandits 16u team a golden path to the finish line in the title game of the 16u TC/USA Nationals, allowing one hit and striking out eight in a 5-0 victory over Texas Glory-Adkins at Concordia University. That hit came with one out in the seventh and was the only ball to leave the infield.

In terms of offense, the Bandits took control in the final thanks to some ringing, fence-rattling extra-base hits. Joley Mitchell tripled in Eden Mayo for the game’s first run in the second inning, while a double from Avrey Steiner doubled the lead to 2-0.

Mayo reached base three times, and Faith Hensley doubled and scored in the seventh.

The Firecrackers earned 4-1 triumph over the Texas Dirt Divas to claim the 14U title.

Starting pitcher Grace Uribe opened with four perfect innings and Amanda Johnson, who entered in the sixth, earned the save.

In the second inning, Hailey Smith kicked things off with a single to left field. Two batters and a stolen base later, Macey Keester drove Smith home with a sacrifice fly, taking the lead, 1-0.

Smith led off the fourth with a double, allowing Rachel Allen to stretch the lead, 2-0, with an RBI single.

Already with two runs scored, Smith climbed into the RBI column in the sixth inning with a single, scoring Elianna Reyes who represented the third run of the ballgame for Firecrackers.

The Dirt Divas threatened in the bottom half of the sixth inning, though. With runners in scoring position, head coach TJ Houshmandzadeh called in Amanda Johnson to finish things off.

Looking for more insurance, the Firecrackers plated a run via an RBI double from Abigail Mulvey that scored Macey Keest to make it 4-0.

Three hits by Texas pushed across a run in the seventh, but Johnson forced a pop up, securing the championship.